This document describes an XML document that contains the minimum data elements required by the LEDES IPMM invention disclosure standard, release 1.01.  The purpose is to provide a general idea of how the data appear in the underlying XML document and also an understanding that the standard is not prescriptive, but is intended to be flexible.  Many additional data elements are defined by the standard, but are not required.  Presumably applications will enable the user to configure many of these additional elements as required based on the user’s needs.  A conforming application must use these defined elements wherever possible, rather than creating conflicting proprietary elements or attributes.

An XML document containing the minimum elements required by the LEDES disclosure standard, release 1.01, is shown below. Don’t let its appearance concern you; applications are unlikely to display the data as an XML document.  The effectiveness of data entry and display will likely remain a key differentiator among competing products. 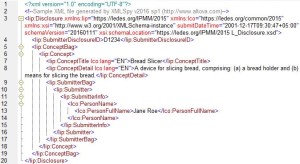 The first line in figure 1 is the XML declaration:

No other content or white space precedes the declaration.  The declaration indicates what version of the XML standard the document implements and what character encoding is used. Encoding defined by the LEDES disclosure standard may change in the future if warranted for internationalization, but presently is the most common XML encoding, UTF-8.

The third line of figure 1 begins the disclosure envelope:

Disclosure is the root element of the LEDES disclosure schema.  The Disclosure element is the envelope that contains all data regarding the invention disclosure.  It is analogous to a physical envelope into which might place information regarding various related concepts and associated documents (e.g., drawings or DVDs) and stamp with certain delivery metadata (sender and recipient addresses).

The “lip:” prefix indicates what “namespace” defines the Disclosure element.  A namespace is effectively a virtual dictionary, in which any definition is exclusive.  The LEDES disclosure standard uses two namespaces, “lip” for IP-specific definitions and “lco” for more generic definitions.  Immediately following “<lip:Disclosure” is the phrase:

The attribute prefix “xmlns:” is reserved and defined by the World Wide Web Consortium (W3C).  “Xmlns:” is used for declaring namespaces.  The phrase defines a namespace with the name “https://ledes.org/ipmm/2015” and provides a nickname of “lip”. Per W3C rules, a namespace name must be a valid Uniform Resource Identifier (URI), but does not need to be an existing web page.  At present, the LOC is experiencing some website issues and you will NOT find an active web page at “https://ledes.org/ipmm/2015”.

Immediately after the “lip” prefix and related namespace name are declared, the next phrase is:

Similar to prior phrase, this phrase declares the namespace name “http//www.ledes.org/common/2015” and assigns the nickname of “lco”.

The next phrase is:

Similar to “xmlns”, “xsi” is an attribute prefix that is reserved and defined by W3C.  For LEDES disclosure purposes, “xsi:” is used solely for defining the attribute schemaLocation used later on line 2.

The next phrase is:

The attribute submitDateTime is defined in the disclosure schema as a data type called dateTimeStamp.  dateTimeStamp represents a specific date and time in the format CCYY-MM-DDThh:mm:ss.sss, plus an appended time zone expression. For example, Australian Eastern Daylight Time is eleven hours ahead of UTC and is represented as +11:00.  2014-11-19T16:28:00+11:00 would equate to 4:28 pm on November 19, 2014 in Sydney and other locations within the time zone.  The attribute submitDateTime is set by the submitting application and defines the time immediately before successful validation and transmission.  This demonstrates a significant value of XSD and XML for the user; there is little chance that the sending application will misinterpret these data.

The next phrase as shown in Figure 1 is

The final phrase in line 2 is:

<lip:ConceptDetail lco:lang=”EN”>A bread slicing device, comprising: (a) a bread holder and (b) means for slicing the bread.

The technical details for ConceptDetail are the same as for the ConceptTitle element.

Every Concept element must contain one and only one SubmitterBag element, which in turn will contain at least one Submitter element.

Every Concept element includes at least one Submitter element, which contains information regarding a person who submits the disclosure.

The SubmitterInfo element can contain different types of information about the person submitting the disclosure, but only the name is required.

The SubmitterInfo element requires one and only one PersonName.  The PersonName element can either be a full name as regular text or can be a more structured collection of given, family, other and nick names, prefixes and suffixes.

This is the closing tag for the SubmitterInfo element.  All aspects of SubmitterInfo are contained between its opening and closing tags.  The element also permits optional data re citizenship, residency, primary language, contact information, and affiliations (e.g., employer).

Lines 16 and 17 close the Submitter and SubmitterBag elements.

Lines 19 and 20 close the ConceptBag and Disclosure elements.  A Disclosure element can also contain optional data re associated files, requested handling, and metadata regarding the submitting application and the transaction process.

LEDES.org is owed and maintained by the LEDES Oversight Committee. We are a volunteer-led not-for-profit organization that creates data exchange standards for the legal industry. You can reach us by using this link.

The only personal information we collect is to manage membership and regulate access to our “behind the login” member content.

When visitors leave comments on the site, we collect the data shown in the comments form, and also the visitor’s IP address and browser user agent string to help spam detection.

An anonymized string created from your email address (also called a hash) may be provided to the Gravatar service to see if you are using it. The Gravatar service privacy policy is available here: https://automattic.com/privacy/.

When using the “Contact LEDES” contact form, we ask you to provide your name, email address, subject and message.  This information email to the LEDES Board of Directors and is also retained within the site until it is deleted.

If you visit our login page, we will set a temporary cookie to determine if your browser accepts cookies. This cookie contains no personal data and is discarded when you close your browser.

We do not share data with any external party.

How long we retain your data

If you leave a comment or post to the Member Forum, the comment and its metadata are retained indefinitely. This is so we can recognize and approve any follow-up comments automatically instead of holding them in a moderation queue.

What rights you have over your data

Where we send your data

Visitor comments are checked through an automated spam detection service.

The Organization’s President functions as the LEDES Oversight Committee Data Protection Officer and can be reached using this link.

How we protect your data

What data breach procedures we have in place

In the event of a data breach, all impacted individuals will be immediately notified.

What third parties we receive data from

At this time, we do not receive data from any third-party sources.

The only automated decision making undertaken by this web site is via Member Mouse and is limited to membership renewal or cancellation as of the next renewal date.

We do not profile user data outside of general (public) information provided by Site Kit.

Necessary Always Enabled
Necessary cookies are absolutely essential for the website to function properly. This category only includes cookies that ensures basic functionalities and security features of the website. These cookies do not store any personal information.
Non-necessary
Any cookies that may not be particularly necessary for the website to function and is used specifically to collect user personal data via analytics, ads, other embedded contents are termed as non-necessary cookies. It is mandatory to procure user consent prior to running these cookies on your website.
SAVE & ACCEPT